TORONTO, Ont. – Canada’s transportation and highway safety ministers have approved a national entry-level training standard for commercial vehicle drivers, which will ultimately be included in the National Safety Code.

The announcement was made today following an annual meeting of the ministers. 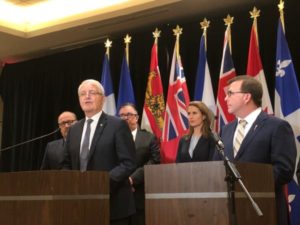 “Since last year, we have made progress on important files, including improving school bus safety, adopting a

One collision in particular continues to be a touchstone for trucking safety initiatives such as this one.

“The Humboldt Broncos tragedy in Saskatchewan is something very high on our agenda when it comes to traffic safety, truck safety, and our transportation system,” Saskatchewan Highways and Infrastructure Minister Greg Ottenbreit said during a related press briefing.

The Canadian Trucking Alliance (CTA) was quick to applaud the initiative.

“The basis of this commitment was clear – that all Canadians should expect that people who receive their commercial driver’s licence and share the road with Canadians should be properly trained,” said Canadian Trucking Alliance chairman Scott Smith.

“It’s a historic day for the trucking industry, which wholeheartedly shares the government’s vision for improved highway safety. Canadian tractor-trailer drivers across Canada who challenge the licensing test will now have to undergo a meaningful, minimum level of training and will be tested on the same technical elements they were trained for.”

“Today’s announcement marks another chapter in the evolution of an already-strong partnership between CTA and [the Canadian Council of Motor Transport Administrators] to improve highway safety in the truck-training sector through policy development,” said CTA president Stephen Laskowski. “Government officials and CTA will be working together continuously to ensure that minimum pre-licensing training is held to the highest standard over time and consistency is applied across all jurisdictions.”

Provinces and territories are ultimately responsible for driver licensing.