At R.J. Fisher, it’s all in the family - Safety Driven - TSCBC
Back to News
Share

Ronald “Ronnie” Joseph Fisher, founder of R.J. Fisher Transport, always said the secret to his success was being a family man.

After driving for 15 years, including three within the modular building industry, Ronnie Fisher started his own company near Vernon, BC, in 1991 by himself, with just one truck. He gradually added a pilot car and driver. Now R.J. Fisher has four trucks and drivers, three pilot vehicles and one pilot driver, and an installation crew. They sub-contract pilot driving and crane operations.

To Ronnie, building his business was building a good life for his family. He hired family members, he said, because he had “to give the bums a job” but they didn’t get a free ride; he expected family to exhibit the same values and work ethic as he did and the same concern for clients. He was known for treating his employees like family, sharing in their successes and losses, and telling one-liner dad jokes.

Ronnie passed away in the spring of 2021. His legacy is the family business that continues his work, with people who are, like him, dedicated to the highway and its safety. Today, Ronnie’s daughter, Shelby, is the owner and president. She started with the company as a pilot vehicle driver seven years ago, worked in the office for two years, and assumed the reins in January 2021. But she didn’t come into the company as a newbie; she grew up in the office, bugging her dad to teach her the business. Drivers who worked for her dad and saw her grow up now work for her. It’s a unique situation.

Shelby says she was a bit nervous at first that these experienced professionals might not want to follow her lead, but she says they treat her with respect and are still the great team her dad put together. She continues to maintain the positive work environment that Ronnie inspired at R.J. Fisher where team members are both friends and family, making sure she extends that ethos to people new to their group. She is proving herself by taking the company into the future, “making things better in the best way possible,” to help it grow and thrive.

Moving large things is hazardous, with lots of moving parts. It takes intensive training to make sure workers and drivers are aware of the risks. The mechanics of hauling buildings hasn’t changed; it uses safety chains, cranes, and strapping over the roofs, which becomes more dangerous as the weather changes. A big hazard is the lack of truck awareness on the road; other drivers’ actions are often unsafe. The pilot vehicle drivers are there to support the truck drivers and to help make other drivers aware of the over-sized load. Shelby is proud of the company’s clean safety record and attributes it to the company’s great work environment. 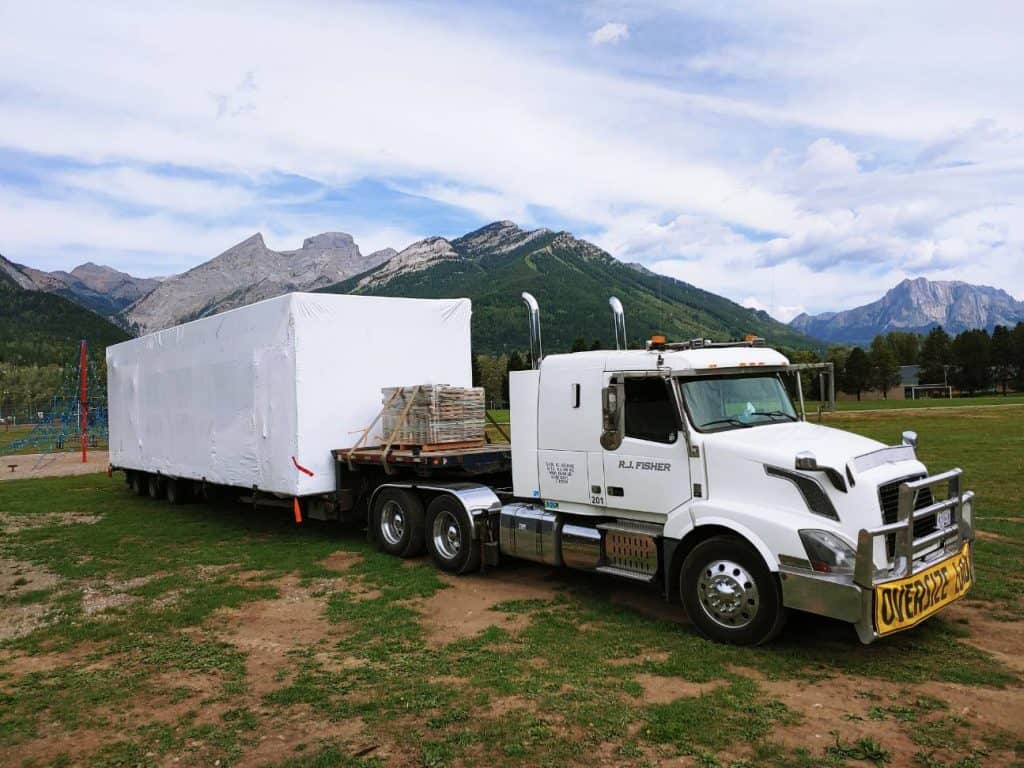 The COVID pandemic did not slow R.J. Fisher’s work. Each driver drives the same truck all the time and their work doesn’t require much contact with others, so the team was essentially its own bubble. They wore masks as required and sanitized vehicle cabs if the vehicle had been out for maintenance; the cleaning practice will be retained after the pandemic to mitigate catching other viruses that can keep people off work.

R.J. Fisher Transport is working toward COR certification. It’s among the changes Shelby knows are necessary to continue the company’s success. Safety training is mainly done internally and supplemented by specific courses, such as first aid or Fall Arrest training, but will branch out as they expand the installation team.

Safety communication is managed in person; Shelby maintains an open-door policy; connects with each driver at the end of the day, realizing that being alone can be difficult; and is never more than a phone call or text away. The trucks are blue-tooth enabled, so drivers can reach out as needed. The work is such that drivers are often away for several days, or not—they could just as well be in the Vernon area for extended periods. At the end of each month, the team gathers as a family to mark their successes.